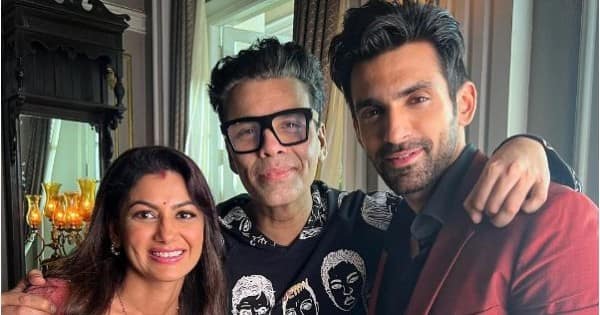 Karan Johar’s Rocky Aur Rani Ki Prem Kahani stars Dharmendra, Shabana Azmi, Jaya Bachchan, Ranveer Singh, and Alia Bhatt in the lead roles. The film is slated to release next year, and a few days ago, it was revealed that TV stars Shraddha Arya and Arjun Bijlani have been roped in for a cameo in the movie. It was also reported that Sriti Jha and Arjit Taneja will also be seen in the cameos, and today, it has been confirmed that the Kumkum Bhagya actors will be seen in Rocky Aur Rani Ki Prem Kahani. Also Read – Bullet Train: 5 reasons why Brad Pitt starrer should not be missed

Arjit Taneja took to Instagram to share a picture from the sets with Karan and Sriti. He captioned it as, “Can’t help but Flaunt this. Just 14 hours of being directed by this Legend. It has been an overwhelming and humbling experience to say the least. Thank you @karanjohar @dharmamovies for making us a small part of this blockbuster in the making and to the whole team for being so generous. All the very best to all of you #Gratitude.” Sriti Jha replied to the post and wrote, “Fortunate firsts!!” Also Read – Laal Singh Chaddha: Kareena Kapoor Khan was not the first choice for Aamir Khan starrer; here’s the list of films where she was the original choice but rejected them

While we will get to watch these four TV stars in cameos in the film, one more TV actress plays a pivotal role in it. Anjali Anand, known for her performance in the show Kulfi Kumar Bajewala, has an important role in the film. She was also earlier seen in the making videos. Also Read – BTS: TXT’s Soobin awestruck by J-Hope aka Jung Hoseok’s Lollapalooza performance; check out cute fanboying video

Karan Johar’s last directorial Ae Dil Hai Mushkil had cameos by stars like Shah Rukh Khan, Alia Bhatt, and Lisa Haydon. Their scenes were surely one of the highlights of the film, and now, as Karan has roped in these TV stars for the cameos in Rocky Aur Rani Ki Prem Kahani, we are sure the audience will have high expectations from it.