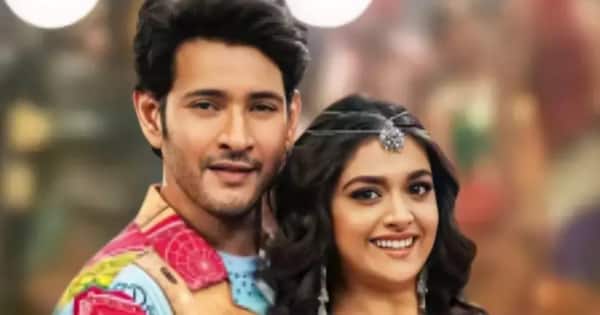 Sarkaru Vaari Paata is rocking the box office. Mahesh Babu and Keerthy Suresh’s film is setting records for a Telugu movie. It has made Rs 75 crores worldwide already. Mahesh Babu has a huge fandom in the US. There, it has crossed the USD 1.5 million mark already. This means it has made more than Rs 11 crores. Mahesh Babu’s film is a mass entertainer, and people are loving his swag and comic element. Also Read – The Archies: Shah Rukh Khan fans and social media go gaga over Suhana Khan; say, ‘Coming for the throne, Beware Alia Bhatt’ [Read Tweets]

The movie is set against the backdrop of a bank scam. The songs composed by Thaman Kalavathy and Penny are huge hits. Mahesh Babu’s film should easily cross the Rs 100 crore mark by end of Saturday. After RRR, it is the movie that has smashed records in the Nizam states. The producers of Sarkaru Vaari Paata already held a party to celebrate the movie. Mahesh Babu also made news with his statement Bollywood can’t afford me just before the release of Sarkaru Vaari Paata. Also Read – Sarkaru Vaari Paata on OTT: Mahesh Babu-Keerthy Suresh’s film digital rights sold to THIS platform

On the other hand, Ranveer Singh’s Jayeshbhai Jordaar made Rs three crores on day one. That amount was predicted by trade experts. Mahesh Babu’s Sarkaru Vaari Paata is smashing box office records after RRR. Also Read – The Archies: Suhana Khan, Agastya Nanda, Khushi Kapoor take us back to the 60’s in this tale of friendship; first look out

Our reviewer Russell D’Silve wrote, “Unlike his last 4-5 films, Director Parasuram thankfully tries something different with Mahesh Babu’s character in Sarkaru Vaari Paata. The confrontation scenes between Mahesh Babu and Rajendranath are also high on spicy drama while the action scenes stand out for how well they’re mounted.” Parasuram Petla earlier made Geetha Govindam with Vijay Deverakonda and Rashmika Mandanna. Mahesh Babu’s next is going to be with SS Rajamouli.