Tamil singer Bamba Bakya passed away earlier today. He had lent his vocals to Vikram, Jayam Ravi, Trisha and Aishwarya Rai Bachchan starrer Ponniyin Selvan. A lot of celebrities are mourning his demise and offering condolences in whichever way they can. Bamba Bakya was just 49 and had been keeping unwell, as per media reports. It is said that Bamba Bakya suffered a heart attack while undergoing treatment. Also Read – Upcoming New Movies in September 2022 to break box office dry spell: Brahmastra, Vikram Vedha, Ponniyin Selvan and more

A media report states that on Thursday, Bamba Bakya complained of uneasiness. He was soon rushed to the hospital. His sudden demise has shocked everyone in and out of the industry. The singer’s fans were disheartened upon hearing the news. As per reports, he was undergoing treatment yet suffered a heart attack. He left for his heavenly abode last night in a private hospital in Chennai. Also Read – Post Ponniyin Selvan, Aishwarya Rai Bachchan to work with Ajith Kumar after 23 years?

Bamba Bakya was suggested to the makers of Ponniyin Selvan by AR Rahman. The singer also lent his rich baritone vocals to Ponniyin Selvan’s song Ponni Nadhi. Actor Karthi mourned his demise saying that he wishes his family gets the strength to bear such a tragic loss. Siddarth Srinivas also mourned his loss alongside other fans and well wishers. Check out the tweets here: Also Read – Ponniyin Selvan Part 1: Aishwarya Rai Bachchan’s BTS photo as queen of Pazhuvoor from sets of Mani Ratnam film leaves fans mesmerised

Life is too short !
Celebrate and cherish the time you’ve right now….
Gone to soon brother #BambaBakya
Heartiest Condolences to his family ? pic.twitter.com/4Gslo1ZKhO

RIP singer #BambaBakya – known for his beautiful and unique voice. Raati, Pullinangal and the starting bit of Ponni Nadhi will always be special! pic.twitter.com/eUc5OsRrXg

Truly devastating to know that the impeccable voice #BambaBakya is no more. ?

RIP #BambaBakya sir. He’s known for his beautiful and unique voice. #Simtaangaran and #Kaalame will always be special. Deepest condolences to his closed and dear ones! ?♥️ #RIPBambaBakya pic.twitter.com/2vjJ2C6umc

AR Rahman’s daughter Khatija Rahman took to her social media handle and shared a picture on her Instagram stories. “Rest in peace brother,” she wrote while adding that she couldn’t believe that he has passed away. She remembered him as a wonderful person and a musician. 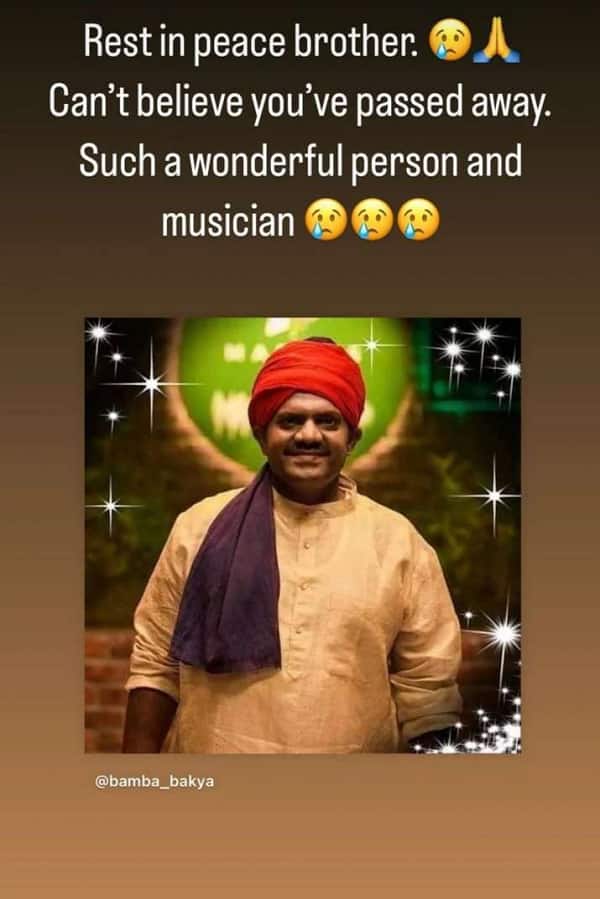 AR Rahman made Bamba Bakya sing Simtaangaran and Pullinangal. Simtaangaran is a fun folk number featuring Thalapathy Vijay. Pullinangal is a song from 2.0. Bamba has also touched hearts with a sad song called Kalame Kalame from Vijay starrer Bigil. All of his songs became popular amongst the masses.