Skip to content
HomeEntertainmentKoffee With Karan 7: Aamir Khan SPEAKS on Ranveer Singh’s controversial nude photoshoot; says, ‘I thought it was quite…’ 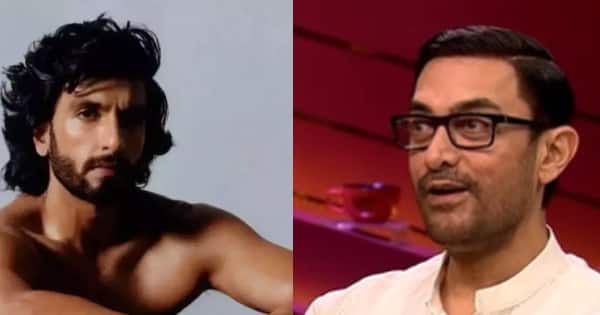 Aamir Khan and Kareena Kapoor Khan are the next guests on Karan Johar’s Koffee With Karan 7. They are going to appear on the show ahead of the release of Laal Singh Chaddha. The promos of the episode are out and it appears that Aamir Khan is going to be a firecracker in this one. From talking about people’s sex lives to ex-wives, the trio will talk about everything. Ranveer Singh will also be a part of the conversation. Also Read – Laal Singh Chaddha actress Kareena Kapoor Khan FINALLY breaks silence on being offered Rs 12 crore for playing Sita in Ramayana

Aamir Khan talks about Ranveer Singh‘s nude photoshoot
Karan Johar quizzed Kareena Kapoor Khan whose Instagram account she stalks for thirsty pictures. Aamir Khan was quick to ask Karan what does he mean by ‘thirsty pictures’. In response, Karan Johar after getting his laughter under control said, “It’s like sexy, thirst traps.” Aamir then said, “sexy photos? They’re called thirsty photos these days?” Kareena then chose Ranveer Singh. That’s when there was a mention of his controversial nude photoshoot that took entertainment news channels by storm. Aamir Khan stated that he has seen Ranveer Singh’s pictures for Paper magazine and said it was quite bold of him. “Yes I have seen them. He’s got a great physique. I thought it was quite bold of him,” the Laal Singh Chaddha actor said. Also Read – Darlings: Alia Bhatt compared to Amber Heard for promoting violence against men; netizens call for BOYCOTT [View Tweets]

Aamir Khan also spoke about the dynamics he shares with his ex-wives Kiran Rao and Reena Dutta. He stated that he has immense respect for both of them and they try to meet up at least once a week like one happy family. “We all get together once a week, no matter how busy we are. There is a lot of genuine care, love and respect towards each other,” he said. Also Read – Friendship Day 2022: Aamir Khan-Rajkumar Hirani, Kareena Kapoor Khan-Karan Johar and more actor-director duos who share a great bond

Laal Singh Chaddha release date
The film that is the Hindi adaptation of Tom Hanks‘ Forrest Gump is going to hit the theatres on August 11, 2022. It also stars Naga Chaitanya and Chiranjeevi.