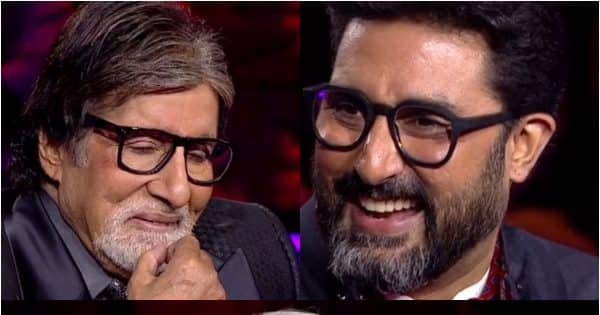 11 October 2022 is going to be a special episode of Kaun Banega Crorepati 14 to celebrate Amitabh Bachchan’s 80th birthday Jaya Bachchan and Abhishek Bachchan will be gracing the episode. A few days ago, a promo of the episode was released in which Big B gets emotional on seeing his wife and son, and now, Sony TV has released one more promo which will tickle your funny bone. In the promo, we get to see that Jaya Bachchan puts Amitabh Bachchan in a difficult situation, and Abhishek’s reaction to it is hilarious. Also Read – Ponniyin Selvan, Goodbye box office collection: Hindi version of Aishwarya Rai Bachchan starrer beats Amitabh Bachchan’s movie

So, Jaya Bachchan asks Big B, “If we both were stranded on an island then what three things would you take?” After hearing the question, Abhishek Bachchan jokes, “Take a lifeboat so you can run away.” Amitabh Bachchan asks for options, but Jaya Bachchan tells him that there are no options. Well, Big B is not able to answer and then Jaya Bachchan says, ‘Phase’. Also Read – Ponniyin Selvan, Goodbye box office collection: Chiyaan Vikram film stays stable on second Friday, Amitabh Bachchan starrer takes a slow start

Well, the Bachchans fans simply can’t wait to watch this episode as it will be emotional as well as hilarious.

Meanwhile, Amitabh Bachchan is currently busy garnering praise for his performance in the recently released film Goodbye. The movie has not left a mark at the box office, but it has received positive reviews from critics.

Talking about his upcoming movies, Big B has Uunchai and Project K lined up. Uunchai, which also stars Parineeti Chopra, Anupam Kher, Boman Irani, Danny Denzongpa, Neena Gupta, and Sarika, is slated to release on 11th November 2022. Project K, which also stars Prabhas and Deepika Padukone, might hit the big screens by the end of 2023 or early 2024.