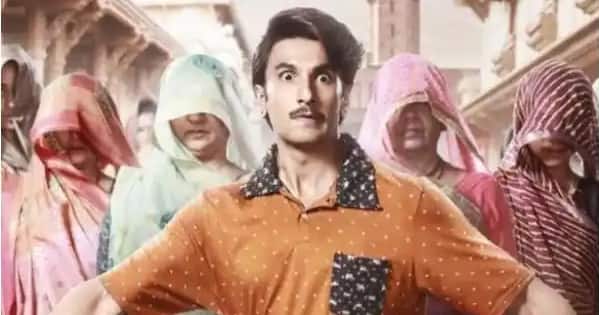 Jayeshbhai Jordaar is turning out to be a huge disappointment for fans. Ranveer Singh‘s social comedy saw a marginal rise in numbers on Saturday making Rs 3.8 crores at the box office. This is a very poor show. On Friday, the movie had made Rs 3.2 crores at the box office. The collections were the same as Ajay Devgn-Rakul Preet Singh’s Runway 34. But the Tanhaji actor’s movie picked up some pace after a poor start. Also Read – Mouni Roy’s husband Suraj Nambiar reveals how it was literally love at first sight with the Naagin actress

Jayeshbhai Jordaar is facing competition from Sarkaru Vaari Paata, Sivakartikeyan’s Don, Bengali film Aparajito and Saunkan Saunkne, the Punjabi film which is doing great. Those who have seen Jayeshbhai Jordaar have said that while Ranveer Singh, Ratna Pathak Shah and Shalini Pandey are good, the script is quite poor. Many critics did not like how the serious issue of female infanticide was treated in the movie. Also Read – Ira Khan’s boyfriend Nupur Shikhare has THIS reaction to the young lady’s bikini pics and savage retort to trolls

Jayeshbhai Jordaar is set in Gujarat. Ranveer Singh is getting a lot of love though for his performance as Jayeshbhai. He is the only redeeming factor of the movie. Our critic Russell D’Silva wrote, “Ranveer Singh, Ranveer Singh, Ranveer Singh! That’s sums up everything. The actor has progressed with each film and Jayeshbhai Jordaar is yet another classic added to his list. From mannerism, accent to emotions – he has got everything right. He simply flows effortlessly from one scene to another like maska spreads on bread.” Also Read – Nakuul Mehta’s son Sufi looks for his Simran, Ankita Lokhande’s cosy pics with Vicky Jain and more: Meet the TV Instagrammers of the week

Ranveer Singh has Cirkus with Rohit Shetty next. The movie is coming out in December. Their film Simmba in 2018 was a super duper hit.