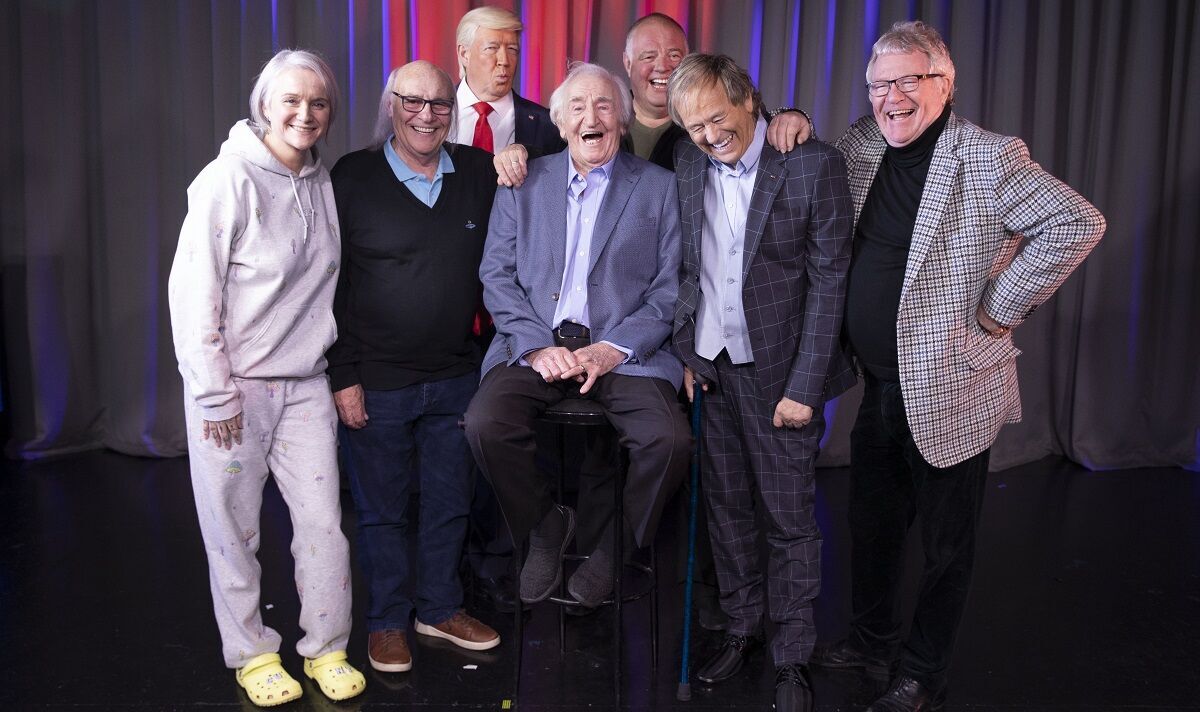 “Chase me” star Duncan Norvelle, 64, veteran stand-up Jimmy Jones, 84, and Mick Miller, 72, the Liverpool-born master of the one-liner, were among a nine-strong cast delivering a tsunami of old-school titters to grateful packed houses.

West Country stand-up Cerys Nelmes, at 44 a relative youngster, quipped, “It’s an honour to be in this line-up with all these comedy legends. To be honest I thought most of them were dead.”

A joke with a sting of truth. When producer Jim Davidson had the idea of making a show in the fast-paced spirit of ITV’s long-running hit The Comedians, one of the first comics he asked was Duggie Brown who died weeks later aged 82.

The project has been beset with problems. Ageing stars Roy Walker, Johnnie Casson and Jimmy Cricket were too unwell to appear, a cameraman crashed, and there were unfulfilled threats to picket the show.

But the public loved it. 1,000 people – a capacity crowd – turned out over two nights. People had come from Wales, Windsor, Essex, Lancashire and beyond. Why? “It’s an event,” Simon, 38, from west London told me. “I’ve come because it could be my last chance to see these legends live.”

On the first night, Cockney comic Jones, a favourite of the late Duke Of Edinburgh, looked frail, but the years fell away as he started his act.

Other comedians on the bill included Bobby Davro, 64, on manic form, Mike Osman, 63, who appeared as Trump (“wouldn’t it be great if I could do the voice”), and northern club turn Clive Cooper, whose TV roles include Brassic, Shameless and Coronation Street.

Norwich-born funnyman Justin Panks, 47, told me, “I’m not sure if they wanted me here to perform or to harvest my organs.”

He added: “Cancel culture is corrosive. People like my parents like joke-based comedy. My parents are not bad people. Are they not allowed to laugh?

“I’m on what was called the alternative circuit but if I were in a heavy metal band it doesn’t mean we should ban country. You get the feeling this comedy is too working-class for television. It’s all about Oxbridge now.”

London comic Nik Coppin said: “It’s great to work with legends. Mick Miller was a masterclass and the crowd were fantastic. They call me ‘young Nik’, I’m fifty!”

Davidson, who is filming the show for his Ustreme channel, said: “We just want to make people laugh like they used to. It’s about giving people the best night out they’ve had for ages.

“Jokes are great. People like to go to work the next day and tell them. You can’t do that if you’re watching Nish Kumar.”

Stroke survivor Duncan calls himself “a special needs guest star”. Said Jim, “He’s the bravest of all of us – on stage in a wheelchair to face a tough audience, he went really well.

“How do you know if Duncan’s having an affair with your wife? Tyre tracks on the duvet…”

Born out of the working man’s club circuit, it ran for eleven series between 1971 and 1992, spawned Christmas specials, a touring seaside show and a hit album.

Cerys said: “There’s a real sense of solidarity tonight. We all travelled here together and they had so many interesting stories. I mean, granted, they were all about colostomy bags, pacemakers and hip replacements…

“As the token woman in the line-up I thought at the very least I have the biggest breasts, but nope, Clive took that mantle.”

The audience included professional wrestlers, Status Quo’s manager and indie pop singer, Joe Ward, 30, from Southampton who found the night “refreshing” and told Jim, “I’ve not laughed so much for ages. Thank you, this is just what we need.”