Skip to content
HomeEntertainmentBTS: What’s cooking between J-Hope and Model Irene? ARMY puzzled over their frequent outings together [VIEW TWEETS] 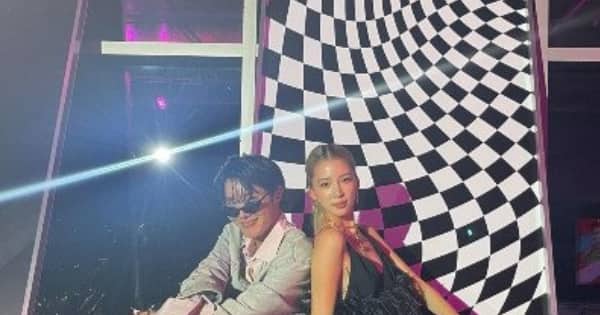 BTS members Jungkook, J-Hope, Jin, RM, Suga, V and Jimin are world famous. Every little about their lives makes it to the headlines. Fans known as ARMY are very inquisitive to know more and more about their favourite band members. So here’s some scoop on BTS member J-Hope. Fans are puzzled over his frequent outings with model Irene and are wondering if something is brewing between the two. The BTS member is currently in New York and is chilling with friend Irene and others. The pictures of them have gone viral on social media and ARMY is racking their heads over the connection between the two. Also Read – BTS: From missing Bangtan Boys together to grooving on Suga X PSY’s That That and more: Jungkook’s Vlog was a great virtual ‘camping’ experience for ARMY [Watch]

Earlier, Irene was spotted at J-Hope’s concert in Chicago. She was standing alongside Jimin as she cheered for him. Later, she was also at the Jack In The Box’ listening party. As the pictures have hit headlines, AllKpop has reported that a social media user has started a post called ‘What exactly is [the relationship between] J-Hope and Irene?’ on a community forum. However, there are some netizens who are claiming that Irene already has a boyfriend. Also Read – BTS’ V aka kim Taehyung and Wooga Squad’s last episode of In The Soop Friendcation to have more fun and deep conversations [Watch]

Many responded to the post. One netizen wrote, “I think it’s because she follows him around too much. She’s also a celebrity but why is she like this?” Another one questioned, “Is she following him around because she’s really his girlfriend?” Some even tweeted about it. Also Read – BTS: J-Hope’s unique way of inviting guest to the Jack In The Box listening party will leave ARMY surprised

Take a look at the tweets below:

J-Hope is in New York with his friends model Irene Kim and
W Korea’s Editor in Chief, Hyejoo Woo. They visited Kaws studio.
I love to see him smile so brightly ? pic.twitter.com/oZ1WhpfFMx

She have a boyfriend, he works with Hoseok and he is at Chicago too, please leave her alone and write nice coments…#jhope #hoseok #hobi #제이홉 irene kim https://t.co/PrbF5lGYXZ

Earlier in July, Irene had posted pictures with J-Hope on social media. Well, okay then!