It is raining babies in Bollywood and Bipasha Basu and Karan Singh Grover recently welcomed their first bundle of joy, a daughter. They have named her Devi Basu Singh Grover. On other hand, Alia Bhatt and Ranbir Kapoor have also become proud parents to their baby daughter Raha. While fans are waiting to catch a glimpse of their babies, Bipasha has treated her followers with the first picture of her baby daughter. Also Read – From Deepika Padukone-Ranveer Singh to Alia Bhatt-Ranbir Kapoor: 6 Bollywood couples who are very passionate kissers in real life

In the picture, Bipasha and Karan were seen holding their baby girl into their arms and looking adorably at her in the golden hour. Being at their wittiest self, Bipasha shared a recipe for making a sweet baby angel. “1) Quarter cup of you 2) Quarter cup of me 3) Half cup of Ma’s blessings and love 4) Topped up with magic & awesomeness 5) 3 drops of rainbow essence, angel dust, unicorn sparkles and all things divine. 6) Seasoning: cuteness and yumminess as per taste,” she wrote. Also Read – Alia Bhatt’s daughter Raha to Anushka Sharma’s cutie Vamika: Celebs who have picked unheard, unique names for their babies

On the other hand, Alia and Ranbir revealed their name of their daughter by sharing a picture of a small jersey and shorts, in the famous Barcelona’s official maroon and blue colours, adorning the wall, with the name Raha written on the jersey. While the entire Kapoor and Bhatt clans are jumping with joy, Riddhima Kapoor Sahni’s daughter Samara also welcomed Raha and wrote on Instagram, “I love u Raha (heart emojis) Lots of hugs from your big sister Sam.” Also Read – Hrithik Roshan, Saba Azad to move in together; here are other celebs who lived in together before marriage 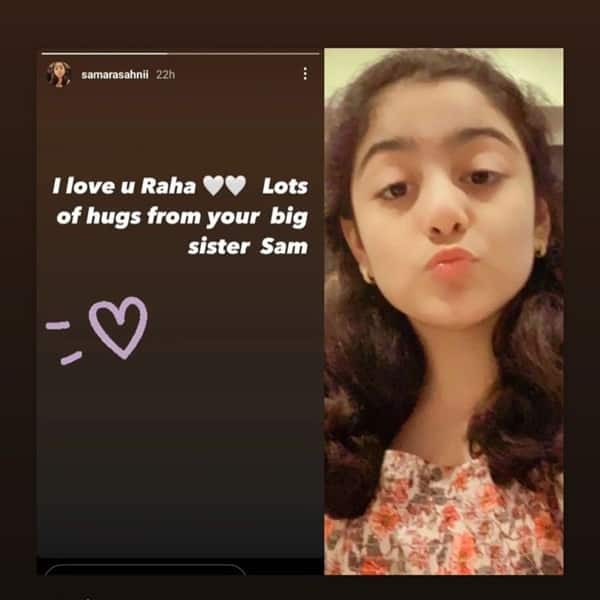 Both the couples are yet to reveal the face of their babies. While Alia and Ranbir welcomed their baby girl earlier this month, Bipasha and Karan announced the arrival of their baby daughter on November 12.

Bipasha and Karan first met on the set of Bhushan Patel’s film Alone in the year 2015, and they tied the knot after one year of dating in April 2016. Ranbir and Alia met on the sets of Brahmastra and hit it off instantly. They dated for nearly 5 years and got married in April this year.