Skip to content
HomeEntertainmentBigg Boss 16 winner: Sumbul Touqeer Khan is MORE deserving than Tina Datta, Archana Gautam to be in the top 3 [POLL RESULT OUT]

In three weeks, Bigg Boss 16 finale will take place. Finally, fans will get to know the winner of Salman Khan’s show. Right now, eight contestants are inside the house. Currently, the race is to be in the top 5 and top 3. Shiv Thakare, Priyanka Chahar Choudhary, MC Stan and others are coming out to be the strong contestants. We carried out a poll asking Bigg Boss 16 fans who among three ladies – Sumbul Touqeer Khan, Tina Datta and Archana Gautam deserve to be in the top 3 of Bigg Boss 16. Also Read – Bigg Boss 16: Soundarya Sharma slams Priyanka Chahar Choudhary’s selective outrage; says, ‘I was appalled…’ [Exclusive]

Bigg Boss 16: Sumbul is more deserving to be in the top 3 of Salman Khan‘s show?

Clearly, Sumbul Touqeer Khan is the winner of the poll. She has received the maximum amount of votes from fans. She has received 52 percent votes. The second on the list is Archana Gautam. As we write this story, she has received 36 percent votes. The last one on the list is Tina Datta. She has received 12 percent votes. Fans have given out the clear verdict that Tina Datta does not deserve to be in the top 3 in comparison to the other two ladies. Sumbul has a great fan following and now, she also seems to be playing the game well. Tina Datta has remained in the news for weeks because of her tiff with Shalin Bhanot. Archana Gautam became famous for fighting with housemates over everything. Also Read – Trending Entertainment News Today: RRR song Naatu Naatu bags Oscars 2023 nomination, Pathaan movie review out, Bigg Boss 16 nominations and more

Check out the poll result below: 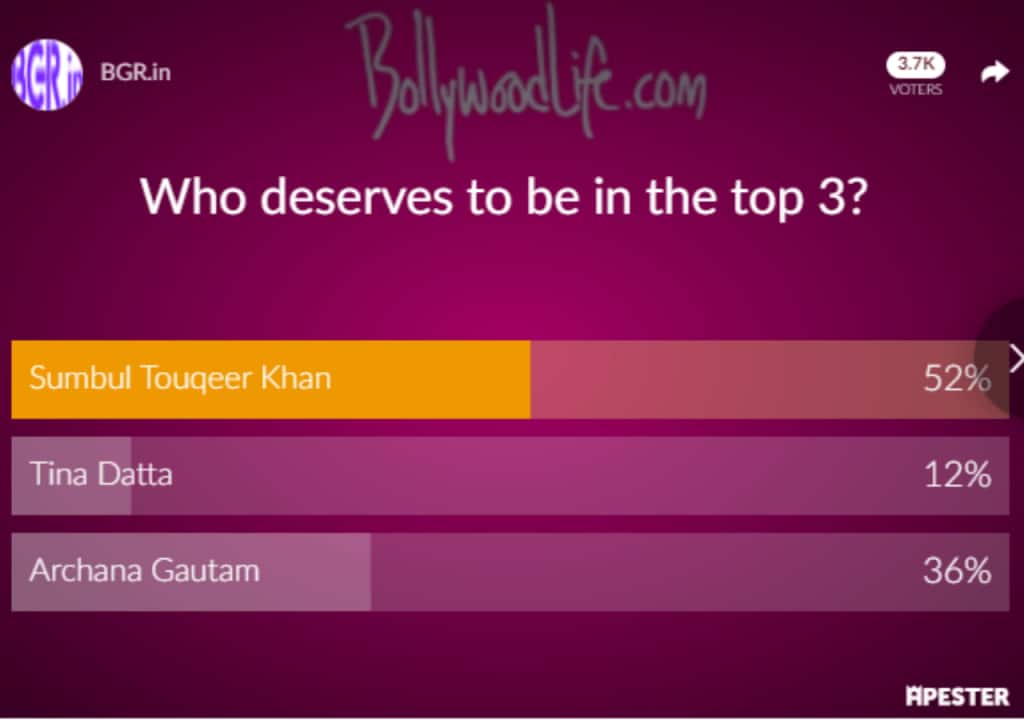 Also Read – Bigg Boss 16: Archana Gautam, Tina Datta to leave; Shiv Thakare, Priyanka Chahar Choudhary, and others make it to the Top 5? Here’s what we know

Well, as per the latest updates, this week, Tina Datta, Shalin Bhanot, Priyanka Chahar Choudhary and Shiv Thakare have been nominated for eliminations. Nimrit Kaur Ahluwalia has Ticket To The Finale Week. It remains to be seen who gets eliminated this week. Last week, Soundarya Sharma was shown the door. The decision was made by the constestants and she had to leave Bigg Boss 16.