Skip to content
HomeEntertainmentBalenciaga controversial campaign: Why is the luxury brand causing such a stir?

As hundreds of people on TikTok and Twitter urge to #cancelBalenciaga, the high-end fashion house has issued an apology for its contentious holiday ad campaign that featured kids carrying fetish-adorned purses and teddy bears. A comment about the giving and receiving of gifts was the goal of the Gift Shop campaign, which was shot by famous photographer Gabriele Galimberti and was motivated by Galimberti’s own “toy tale” photographic series. However, the portrayal of young children holding bears while wearing bondage-style clothing, such as fishnets, cuffs, and harnesses, infuriated online users. We explain the case in-depth.

“We sincerely apologise for any offence our Holiday campaign may have caused,” Balenciaga said in a statement.

“Our plush bear bags should not have been featured with children in this campaign. We have immediately removed the campaign from all platforms.”

Kim Kardashian, one of Balenciaga’s most outspoken supporters, has also expressed her disapproval of the company, saying she was “shocked and outraged.”

“I have been quiet for the past few days, not because I haven’t been shocked and outraged by the recent Balenciaga campaigns, but because I wanted an opportunity to speak to their team to understand for myself how this could have happened,” she wrote in an Instagram story.

“As a mother of four, I have been shaken by those disturbing images. The safety of children must be held with the highest regard and anything against it should have no place in our society – period,” she added.

“I appreciate Balenciaga’s removal of the campaigns and apology. In speaking with them, I believe they understand the seriousness of the issue and will take the necessary measures for this to never happen again.”

The hashtag #cancelbalenciaga has received over 105k views on TikTok alone, with the majority of them being credited to video producers who explained why the holiday promotion is so abhorrent.

Balenciaga has recently gained a reputation for its unconventional fashion campaigns, whether it was due to the editorial-style advertisement’s location or the brand’s imaginative casting. This strategy, which they have used successfully thus far, is reflected in their store designs, runway presentations, and even the product line they offer. According to fashion aggregator and trend forecaster Lyst, Balenciaga has been one of the top 5 hottest fashion brands in the world for four years running. Their innovative approach to fashion has elevated the brand to a sought-after position never before achieved.

But this Gift Shop campaign was always going to stir up the wrong kind of outrage; anything that even remotely suggests sexualizing minors.

Ahead of the Christmas season, a new collection of giftable items, including Champagne glasses, pet bowls with jewels, and teddy bears, was introduced, and to support it, a campaign was started earlier this month. In order to “iterate on the artist’s series ‘Toy Stories,’ an investigation of what individuals acquire and receive as gifts,” Balenciaga hired photojournalist Gabriel Galimberti to photograph the campaign.

This is criminal & sick. Sexualizing children must be a redline. @KimKardashian – speak out now. pic.twitter.com/lNIdywunlY

Not really. First off, the disputed document isn’t even mentioned in the campaign. Actually, it’s from a previous Balenciaga campaign from the company’s partnership with Adidas.

However, a report on child pornography was included in the Adidas advertisement.

It’s specifically from a Supreme Court decision from 2008 that upheld fines for child abuse and other types of sexual exploitation – not exactly the slam dunk TikTok and Twitter users are saying it is, but odd none the less.

In a statement, Balenciaga said they had not approved the paper and were taking legal action as a result.

“We apologise for displaying unsettling documents in our campaign,” the brand said in a separate Instagram story.

“We take this matter very seriously and are taking legal action against the parties responsible for creating the set and including unapproved items for our Spring 2023 campaign photoshoot. We strongly condemn abuse of children in any form. We stand for children safety and well-being.”

Did balenciaga actually remove their social media as a result of the controversy?

Balenciaga has allegedly been “cancelled” as a result of allegations that the company erased its social media account in response to criticism.

Kim Kardashian, as previously reported, has spoken on the matter, expressing her disgust and fury while also announcing that Balenciaga is taking action to make sure that this problem won’t occur again.

“I appreciate Balenciaga’s removal of the campaigns and apology. In speaking with them, I believe they understand the seriousness of the issue and will take the necessary measures for this to never happen again,” she wrote. 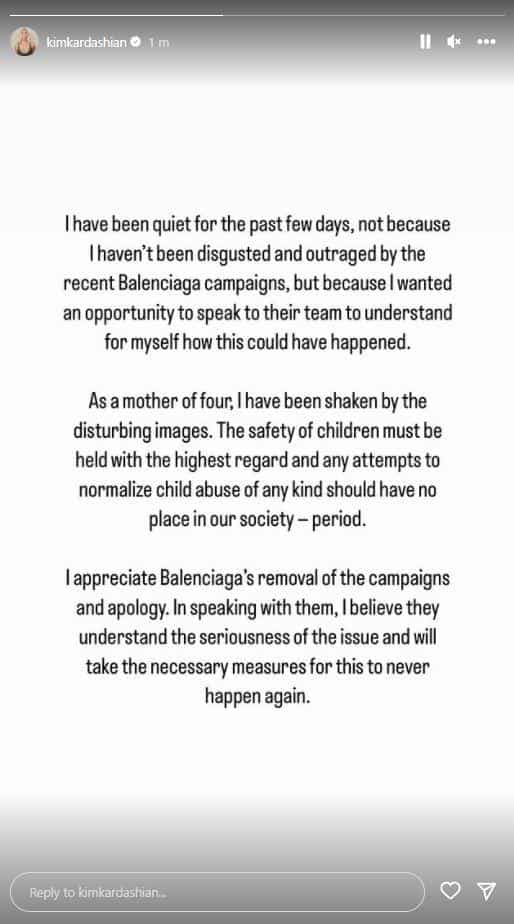 However, many people felt that Kim’s reaction was unsatisfactory. Instead, they demanded that she cut all ties to the brand and condemn it. Kim thankfully made a followup statement that addressed the issue for people who were worried.

“As for my future with Balenciaga, I am currently re-evaluating my relationship with the brand, basing it off their willingness to accept accountability for something that should have never happened to being with – and the actions I am expecting to see them take to protect children,” she said.