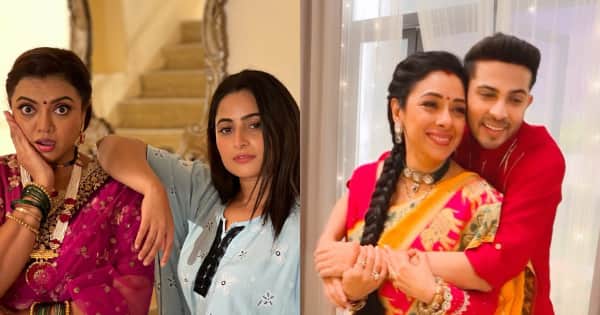 It’s time to surf through our celebrities’ Instagram handles to check who made what post on social media recently. This week, we have Sagar Parekh, Aishwarya Sharma, Divyanka Tripathi, Tejasswi Prakash and more celebs who have won our hearts and made it to the TV Instagrammers of the week. It’s so difficult to choose from various posts that our popular TV celebs share online. Mind you, despite working hard on sets, they don’t fail to entertain their fans on social media too. Let’s check out the TV Instagrammers here: Also Read – Trending TV News Today: Chahat Khanna-Urfi Javed’s NASTY fight, Aishwarya Sharma recreates Tejasswi Prakash’s Naagin 6 dialogue, Nakkul Mehta in Bigg Boss 16 and more

Anupamaa’s new Samar aka Sagar Parekh won a lot of hearts with his entry sequence. And he is also winning hearts with his reel video with Rupali Ganguly. Sagar and Rupali’s reel is the proof that they have hit it off already and are ready to rock and Anupamaa and Bakuda in the show. Also Read – Friendship Day 2022: Jasmin Bhasin-Aly Goni, Neil Bhatt-Aishwarya Sharma and more TV couples who were friends and then fell in love

Kundali Bhagya actress Shraddha Arya is one gorgeous beauty. She recently shared a couple of pretty pictures of herself as Preeta. Shraddha is seen in a sheer white saree. She’s looking exceptionally pretty and fans have called her snow white. Also Read – Anupamaa SHOCKING update: Ankush-Barkha to throw paralyzed Anuj and Anupama out of Kapadia house

Erica recently made a statement in a gorgeous purple saree. She added Brahamstra’s song Kesariya in the background. She looked very pretty in the saree as she showcased her graceful side.

Divyanka shared what she loves about making the reels most. While she loves facing the camera, she enjoys clicking and editing more. Here’s one cool reel video she shared a couple of days ago.

Through Ravivaar With Star Parivaar, Sumbul Touqeer Khan and Pranali Rathod aka Imlie of Imlie and Akshara of Yeh Rishta Kya Kehlata Hai have become fast friends. Recently Sumbul made a reel, a BTS featuring herself, Pranali and Anupamaa actress Madalsa Sharma.

Khatron Ke Khiladi 12 fame Jannat Zubair shared a reel video of herself with her BFF Shivangi Joshi and her brother Ayaan Zubair. The two beauties are posing for the camera while the poor little brother is seen holding all their stuff and also clicking the pictures.

Naagin 6’s Pratha/Kiara aka Tejasswi Prakash set Instagram on fire with a backless blouse in a printed saree. She looked so damn hot. Check out the pictures here:

Khatron Ke Khiladi 12’s Faisal Shaikh aka Mr Faisu shared a reel video with none other than Aamir Khan himself. They both recreated the Andaaz Apna Apna dialogue. It’s such a fun reel. Check it out here: