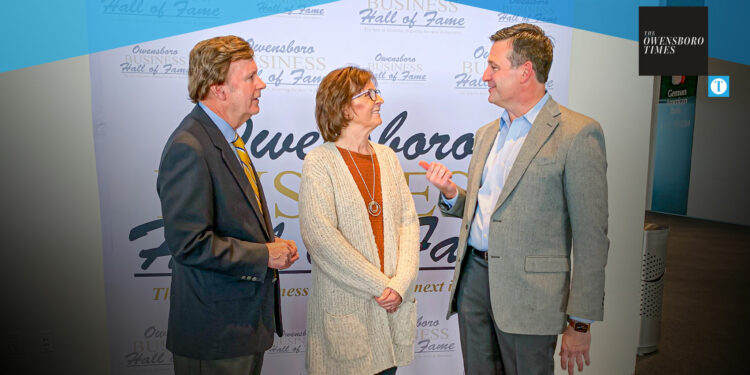 The late Billy Joe Miles (1939-2018), Don Penn Moore III, and Tommy Thompson were announced Tuesday as the 2023 Owensboro Business Hall of Fame Inductees. They will be inducted during a celebration luncheon early in 2023.

The Hall of Fame luncheon will take place at 11:30 a.m. April 13 at the Owensboro Convention Center in the German American Bank ballroom. German American is again serving as the title sponsor of the event.

The announcement of laureates was made by Nick Thompson, President of Thompson Homes, and Dr. Scott Williams, President of Owensboro Community and Technical College. The duo served as co-chairs of this year’s Laureate Selection Committee. Junior Achievement of West Kentucky President Dan Douglas was also part of the announcement.

“These are inspiring people who have served our community with distinction and unparalleled leadership,” said Williams, who is also President of Owensboro Community and Technical College. “As our city and business community continue to grow, we can look to these role models as a foundation on which we can build for the future.”

Individuals are nominated for their outstanding civic and business contributions to the Owensboro area and recognized for their business excellence, entrepreneurial spirit, courageous thinking and action, inspiring leadership, community impact, and service as a role model.

In the inductee announcement, Williams said: “Billy Joe Miles always introduced himself as a farmer, which was true, but he farmed in more ways than just growing corn, soybeans, and wheat,” Williams said. “As the tagline for Miles Enterprises says, ‘we grow opportunities.’ Billy Joe grew business, social, and individual opportunities throughout Owensboro, the state of Kentucky, the United States, and also internationally.”

Debra Seymour, Miles’ oldest daughter, was at the ceremony to represent her father.

“We feel very honored and we’re just very thankful and grateful. “He introduced himself as a farmer, and that is where he started and that’s what he did. He developed lots of businesses in every area that we needed on the farm, not just for us, but for everybody that we were involved with.”

In addition to owning numerous businesses, Miles was involved in exhibition marketing and management and involved with Kentucky Bio Processing. He also traveled the world — including England, Russia, Ukraine, Australia and Bolivia — to help farmers in those areas increase their crops.

In the inductee announcement, Nick Thompson said: “Born and raised in Daviess County, Don entered the family automobile dealership business in 1982 as the fourth-generation dealer. The Moore Automobile dealerships have been community supporters for over 100 years. In 1982 when Don began his career, national economic conditions were not favorable for the automobile industry. The prime lending rate was around 16.5 percent. Don was able to guide the business from an employment of 34 in 1982, to current employment of around 250. The business has grown from total vehicle sales of 900 units per year to over 5,000 units per year, and total sales of $7 million per year to over $180 million per year. Over the years, Don had countless opportunities to grow the business outside of Owensboro, but he felt passionate about the focused growth in his home community.”

Don Penn has a limited role with the company these days. His brother John runs it day-to-day, while their other brother David splits time between the car dealership and his main passion of farming. Moore said it is a big honor to be an inductee.

“You see other people that were put in (the Hall of Fame) during the years that you always looked up to. It amazes me that now I’m at this point in my life, because you look back and you feel like you were just the person looking at the people installed into the Hall of Fame, and now I’m one. It’s just a big honor, and it’s a big honor to me for my family, because it’s really a family business.”

In the inductee announcement, Williams said: “He has demonstrated a lifelong commitment of building, serving, and advocating for the Owensboro community in the entire Commonwealth. As a current chairman of Thompson Homes Inc., he has grown a business that has built over 6,000 homes in the Owensboro area, resulting in a significant economic impact for his community. Beyond his own business success, Tommy has provided leadership and public service, serving as a seven-term Kentucky State Representative. During his tenure in the Kentucky General Assembly, Tommy successfully advocated and sponsored legislation that promoted free enterprise and economic development that helped advance the business opportunities in Owensboro and the entire Commonwealth of Kentucky.”

Tommy’s son Nick is the president of the homebuilding company, but Tommy is the chairman and still working every day. He said he loves the work and has no plans to stop anytime soon. He also said he was grateful to be one of this year’s inductees to the Hall of Fame.

“It’s really humbling and honoring, and particularly humbling to be mentioned in the same breath as two business icons in their own right — Don Moore for what he’s done for transportation in this community, and Billy Joe Miles who I knew and revered for many years,” Thompson said. “Then to be in the shadow of some of these previous laureates that preceded us, it’s really significant. I’ve been blessed to live in a community that’s given us an opportunity to have a successful business, to grow our family, to have a significant quality of life.”