Have you ever tried to make a Christmas tree out of newspaper?

Now I’m not talking about a little desktop-size project.

I’m talking more than 5 feet tall, fashioned out of dozens of papers. 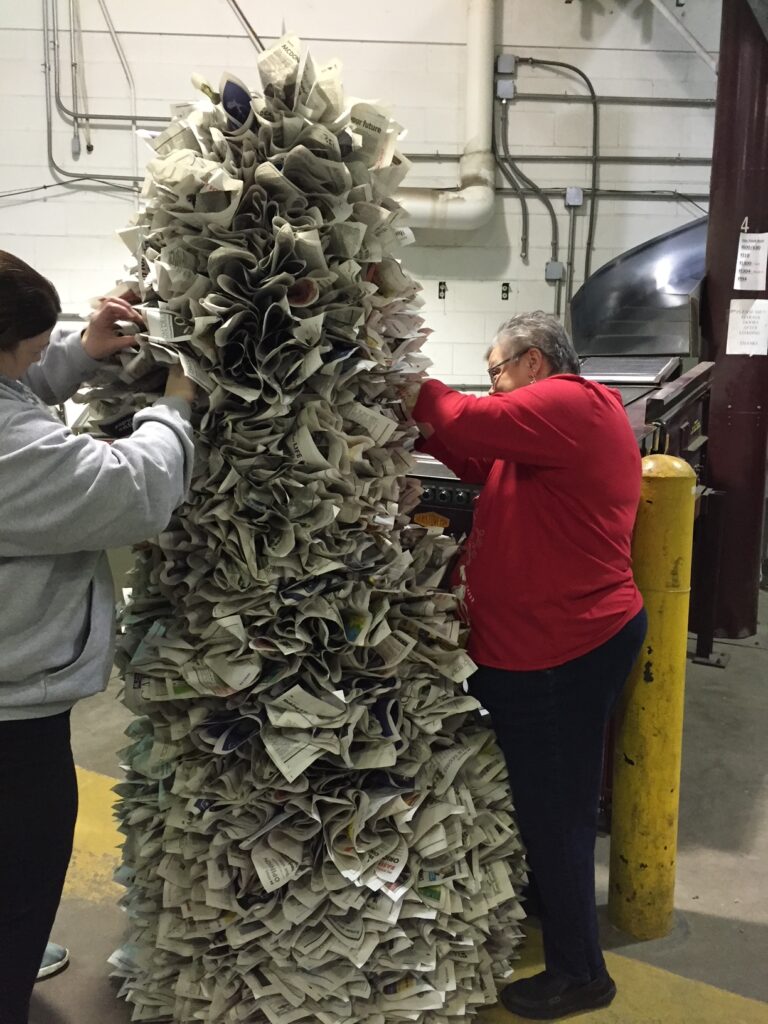 That was 2014, the first year of what then was called the Sioux Falls Made Market.

You’re looking at the old production area of Argus Leader Media, where I worked as a business editor and reporter from 2011 to 2016. I don’t remember the exact path my brain took to get to this, but I had come up with the idea that we should begin writing stories about the locally made work being created in our community, and also give readers a chance to buy from the artists we featured.

That led me to this space, which had intrigued me after discovering where newspapers were printed and then readied for delivery.

What if we could repurpose that traditional, industrial space into a modern pop-up shop? What if we could show the public — and even ourselves — that this brand, also, was locally made? Here’s what it became: 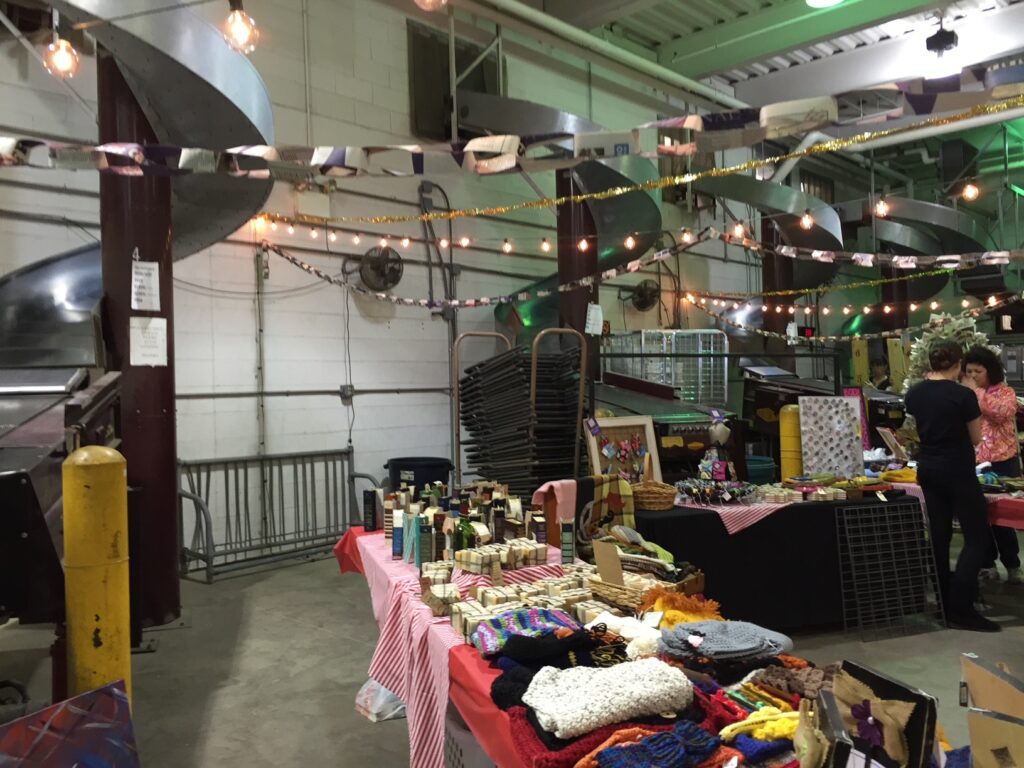 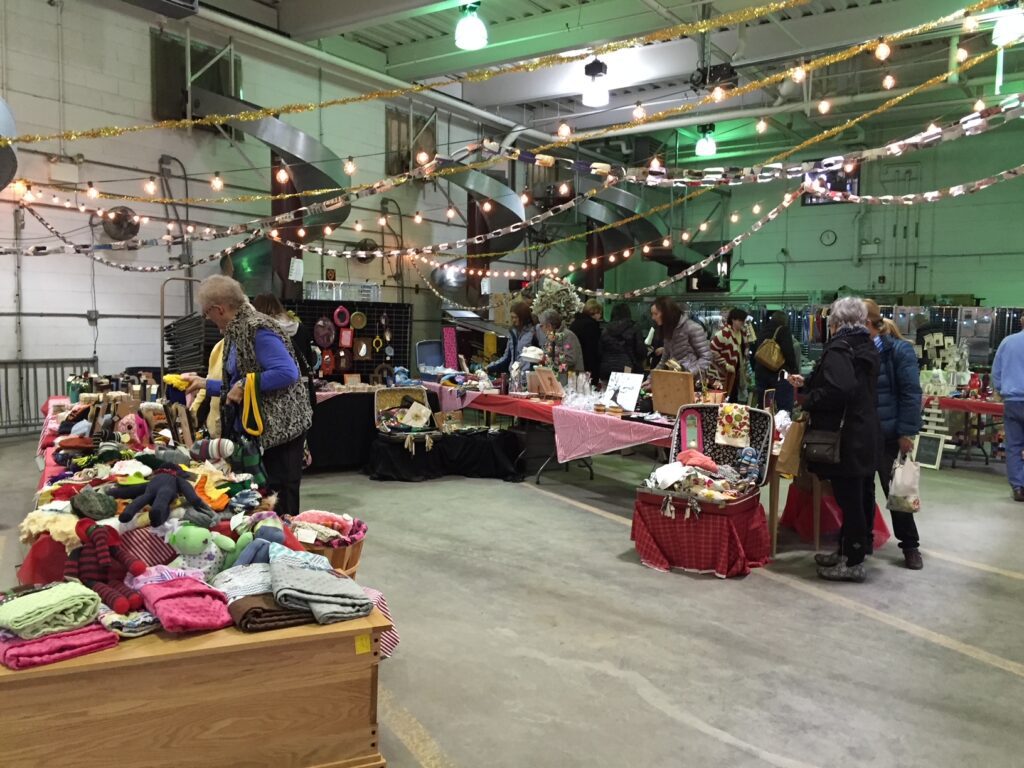 The irony is that while I have plenty of ideas, I’m the last person you’d ask to craft anything other than a story.

So I needed help, which is how I met Stacy Wengler, who had been a partner in a home pop-up shop earlier that year and not only knew how to craft with newspaper but also how to connect with other artists and organize an event.

The first Sioux Falls Made Market was so popular that by the time it came around the following year, 10,000 people signed up on our Facebook event to attend. My publisher, Bill Albrecht — who also deserves credit for not using the many ways to say “no” that he could have — understandably told me we had to move it.

Ever since, we’ve taken over the underground parking garage at Cherapa Place, thanks to the kindness of more visionaries — the Scherschligt extended family — and we did so again yesterday. Thank you to the thousands of people who supported our event this year and, in many cases, every year. You can see — compared with those earlier photos — how we’ve grown: 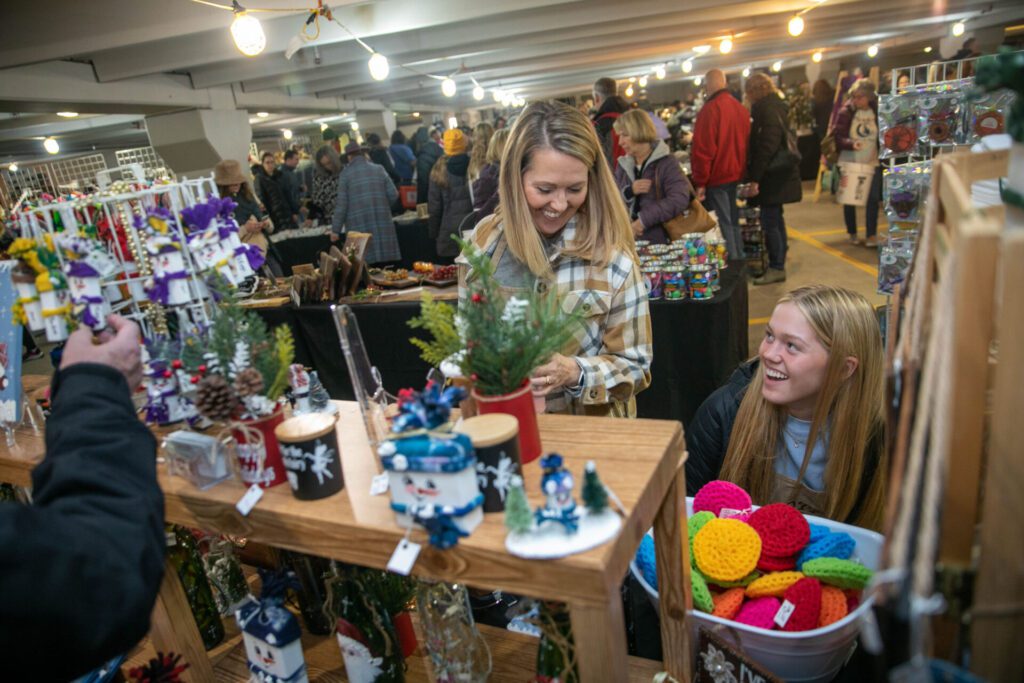 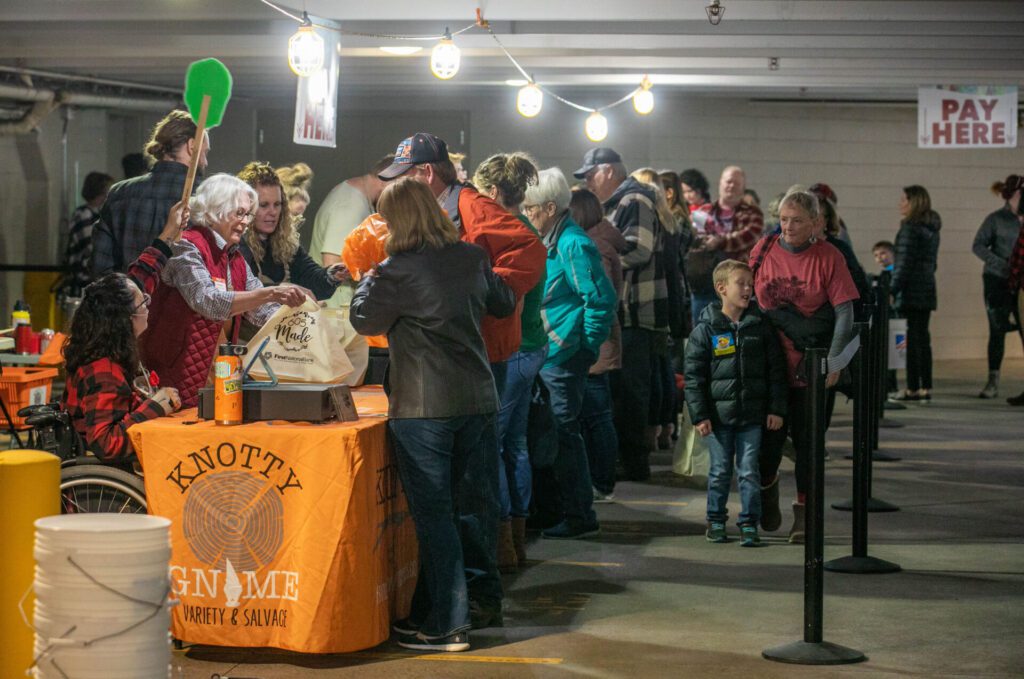 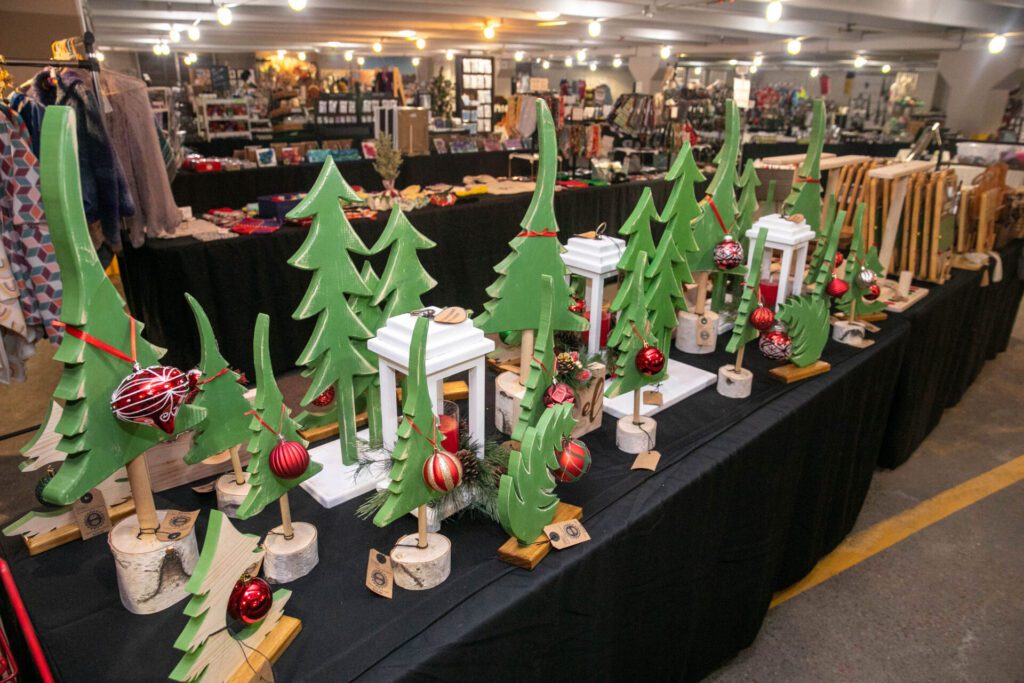 Along the way, Stacy, her husband, Kyle, and I also have become business owners. They were among the first people I met with when I started SiouxFalls.Business. She was starting a retail store of handmade items about the same time, and I was hoping they might agree to continue to work with me even if I didn’t have a major media outlet connection anymore.

They said yes without hesitation. Together, we added a summer night market, and both our businesses took off.

Then, recently, the Wenglers became owners of the business that Stacy’s father founded in 1995 — Beaver Built in Hartford. Stacy didn’t learn her father’s name was Roger until she was in seventh grade — because his childhood nickname, “Beaver,” had stuck for good.

He had been a supervisor in manufacturing and fabrication before deciding to go out on his own. She was 17 and finishing high school at the time. It was her first job and her only job until starting her retail store, Knotty Gnome Variety & Salvage, in 2016. Beaver Built specializes in producing roll-off containers for garbage companies and does business across the region and beyond.

While she’d seen herself moving into ownership, it happened faster than expected when a knee replacement meant her dad couldn’t work.

“There was supposed to be a transition, but it happened in two months,” she said.

Now, Kyle manages Beaver Built full time, she does the sales and office work and runs her retail store — with help from family. She still runs the plasma cutter in the steel shop and sells dumpsters by phone while running Knotty Gnome. 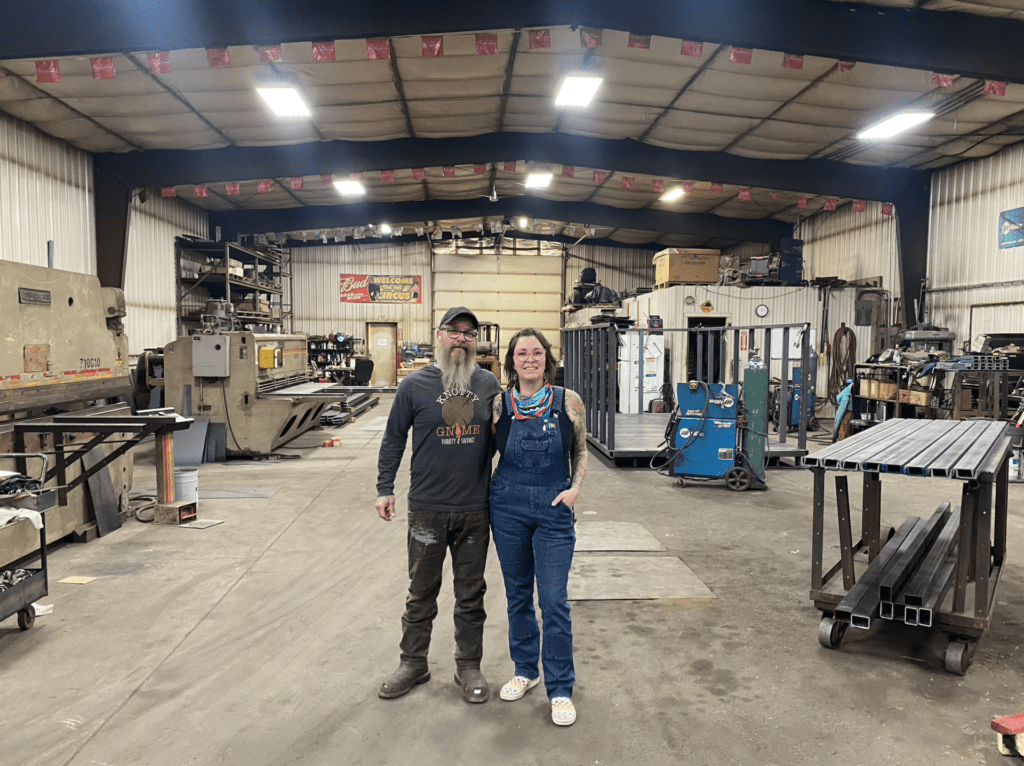 “It’s challenging,” she said. “We’re running two businesses, and we really are busy … but I think our customers know my husband and I are the ones running the business, and we are involved in everything that happens from start to finish with those roll-off containers. Customers tell us and call and say someone else has referred them, so it’s many years of running the business, but we got ourselves to a good spot.” 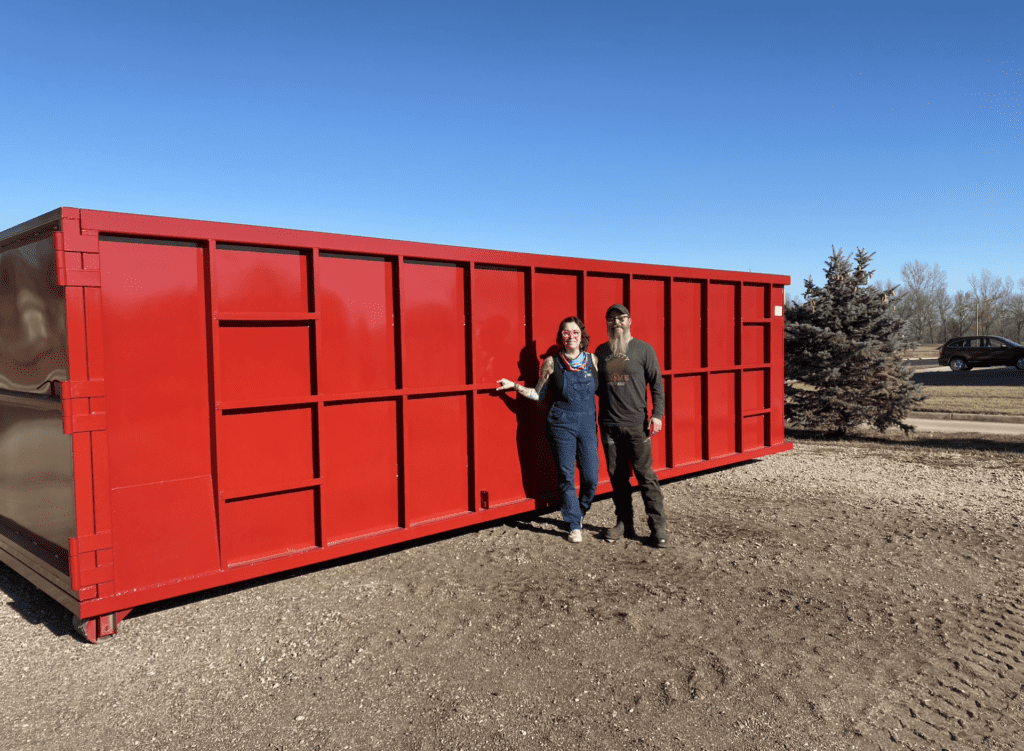 I realized catching up with her lately that we generally are busy enough coordinating our markets that I don’t ask how things are going at Beaver Built. And when she began talking about their employees, I realized I’d been missing an important story.

It’s a small team at Beaver Built, but ask anyone in manufacturing and they will tell you finding even a few go-to employees can be challenging. Since taking over ownership, Kyle and Stacy have put their own stamp on this business, and it shows.

“We want them to know without them we can’t run our business,” she said. “The most important thing when people come looking for a job is finding someone who will be dedicated and care about what they’re doing.”

For instance, attendance had been a hurdle in the past. Now, employees who show up for their full 40-hour workweek receive a dollar-per-hour bonus.

“So it’s not punishing if they don’t show but rewarding them for being there,” she said. “It’s saying that we appreciate you came to work every single day and that’s important to us. With such a small staff, if someone is missing, it changes our whole flow of production, so they’re all an important part of the assembly.” 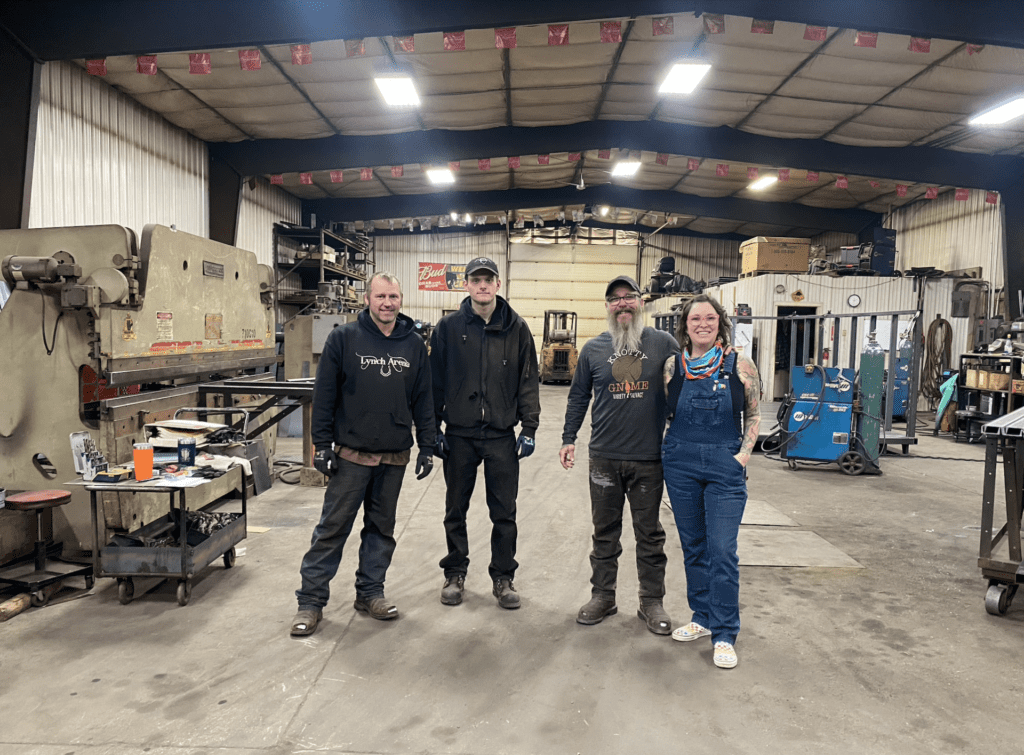 They also gave the whole team a week off when they recently took a rare vacation.

Kyle will fire up the grill and make lunch, and they hand out gift cards for other local businesses as thank-yous regularly.

One new hire recently told them it’s the best job he has ever had.

“We’re aware that we’re a small business, but the work they’re doing for us is so important,” Stacy said. “We’re providing not only for our family but theirs too, and the happier they are the happier we all are.”

The best relationships in business, and in life, are the ones where people make you better, and in a multitude of ways, they have been that example for me. When people work that hard and treat the world the right way, success generally follows and deservedly so. 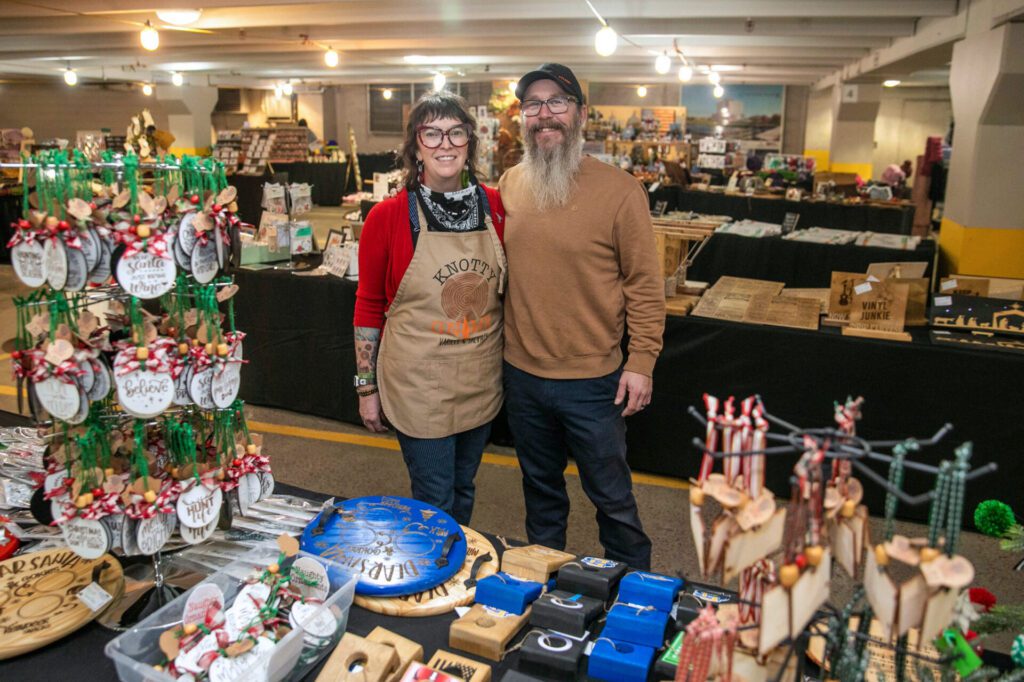 I thought about all of that yesterday as I walked the aisles in the parking ramp. The Wenglers, of course, had been there hours before I had and would leave after I did.

And then I thought back to that very first market. The Argus Leader building was sold this year. The printing press no longer operates there. I now can count the members of the news team on two hands.

I don’t think it had to be that way. But old industries become extinct industries without reinvention and all the qualities it takes to execute it. It takes someone to look at a production area and see a pop-up shop and bring it to life, understanding the audience has changed. It takes the next generation in a business — family or otherwise — to take a new approach to leadership, understanding that today’s workforce is different. 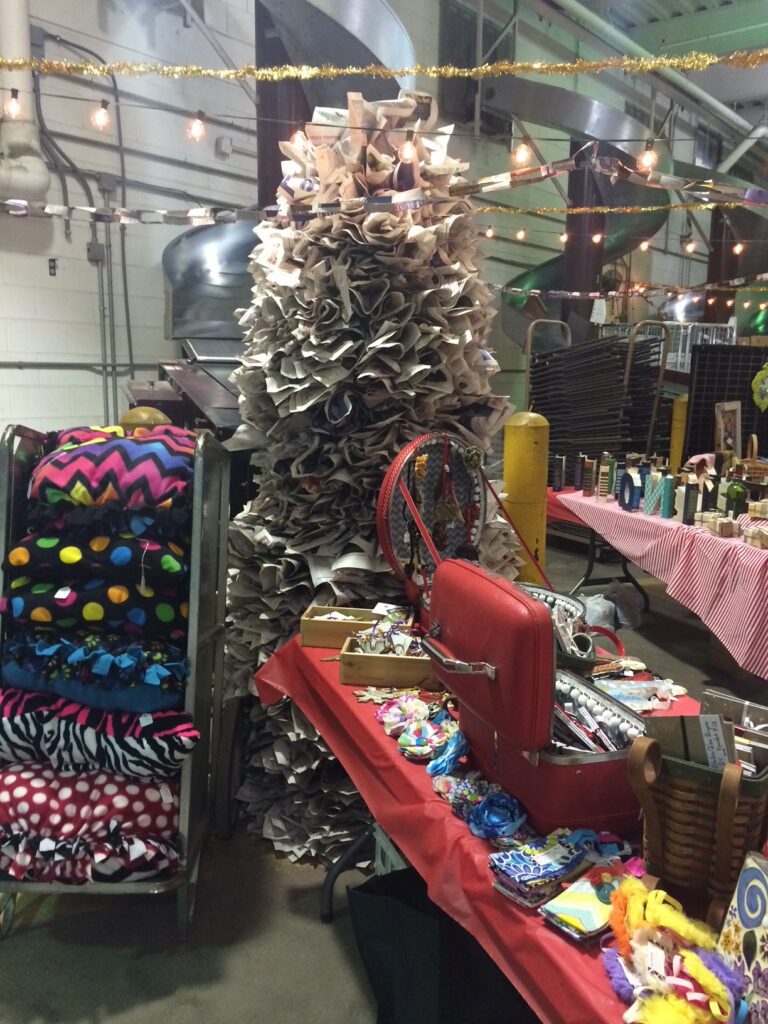 I have no doubt the Wenglers will be in business as long as they want — and hopefully I will be too. But it’s only thanks to solid foundations, broad-based support, continual hard work and recognizing we’re nowhere without our relationships.

Jodi’s Journal: Minnesota, don’t write off your neighbor to the west